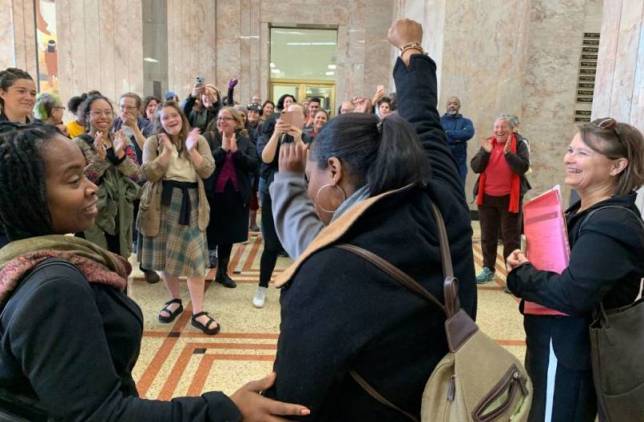 Sameerah Karim raises her fist with supporters after filing a claim to fight her eviction notice at Alameda County Superior Court. (Molly Solomon/KQED)

The Story, Once More

Hundreds of news articles have reported for the last couple of months the saga of four homeless moms and their children who moved last November into a vacant house owned by the investment firm Wedgewood Properties in Oakland, California.

Given that the estimated number of unsheltered people in the U.S. is nearly 200,000 (45% in California), one could assume that many take shelter unobtrusively in vacant property. However, quiet occupation was not the intent in this story.

The moms immediately received strategic and legal help from Alliance of Californians for Community Empowerment (ACCE), admiration from public officials, and support from cheering crowds outside the house. They founded the collective Moms 4 Housing, and in the name of one of the moms, Dominique Walker, defended an eviction notice in court.

Dominique Walker’s argument was that the court must grant right of possession to the women occupying the house with their children, because housing is a right, the house had been vacant for two years, and the alternative to occupying the house would be living in the streets. Walker requested the court’s permission to offer expert testimony on the right to hosing based on federal and international law.

Judge Patrick McKinney on January 10, ruled that Dominique Walker had no valid claim to possession of the house, and eviction could take place. He indicated that Walker’s argument of housing rights under federal and international law were “outside the scope of this proceeding.”

Alameda County Sheriffs then conducted a pre-dawn raid with full swat regalia and battering rams, while many supporters of Moms 4 Housing surrounded the house and the press took it all in. Two moms and two supporters were arrested and soon released. Dominique Walker was not in the house at the time of the raid, since she was attending an interview with Amy Goodman of Democracy Now.

Although Wedgewood Properties offered to pay for a few months of shelter for the moms they refused to negotiate the mom’s request to purchase the house through the Oakland Community Land Trust “for exactly what they paid for it.”

Rights Under Federal and International Law?

There are a number of U.S. federal statutes that prohibit discrimination in housing, provide home-buying assistance, and help with rent payments. None of these statutes mandate a roof over everyone’s head or indicate that housing is a human right.

There are numerous trans-national declarations of human rights. Most of these declarations were implemented by the United Nations, including one of the most notable, the 1948 Universal Declaration of Human Rights. In spite of its mane, the Declaration of Human Rights does not mandate a home for all who need one; instead it speaks of economic, social, and cultural conditions that should be respected. Perhaps most pertinent to the Moms 4 Housing case is the Declaration’s Article 17: ”Everyone has the right to own property alone as well as in association with others. No one shall be arbitrarily deprived of his property.”

The U.S. Constitution is clear on matters of property: no one can be “deprived of life, liberty, or property, without due process of law; nor shall private property be taken for public good without just compensation.” (Amendment 5, Section 1). The prohibition applies also to States: ” …nor shall any State deprive any person of life, liberty, without due process of law…” (Amendment 14, Section 1).

Judge Patrick McKinney’s decision in the Moms 4 Housing case should have been anticipated, given the case’s lack of a Constitutional basis, lack of U.S. statutes affording possession of other people’s property due to an occupier’s hardships, and the fact that international declarations (as opposed to international treaties) have no standing in U.S. courts.

The U.S. Constitution’s clarity in matters of private property has always been a stumbling block to those who favor a more communal ownership of property. They make a distinction between classical liberals (presumably outdated liberals) who defend unrestricted private property, and contemporary liberals who adjust the concept of private property to modern times. Corporate ownership of property, the function of wealth in political power, and rising economic inequalities are realities of modern time cited by contemporary liberals.

The largely supportive response from the press and from public officials that Moms 4 Housing received evidences that private property is no longer universally viewed as the unrestricted right of owners. However, Judge Patrick McKinney’s court order was based on the classical concept of property. According to the research paper mentioned above, such dichotomy could be remedied by implementing an “institutional translation” of “abstract proposals for a fair wealth distribution.” In other words change the nation’s Constitutional and statutory framework to reflect a concept of communal, rather than private, property.

Remedy Worse than the Disease

The Just Vote No Blog has pointed out in several articles that although the U.S. is overall still economically powerful and politically free, there are serious underlying challenges that need correction. Such challenges have the perverse effect of benefiting some and devastating others. Profligate government spending, an unsustainable national debt, cheap money, stocks valued at several times earnings are root challenges that will not be corrected by simply distributing property. Moms 4 Housing and their supporters are sadly on the wrong track.