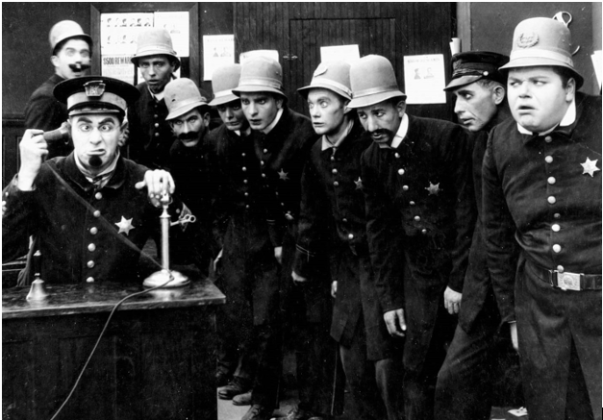 There is nothing humorous about anyone getting sick or dying. Therefore, it is imperative that we all forcefully call attention to societal failings that place people at risk. At present people around the world are dealing in one way or another with the spread of the new virus COVID-19. As is often the case, it takes an emergency such as COVID-19 to reveal how prepared or woefully unprepared our social institutions are in containing major risks. Such revelations go beyond basic preparedness, but point to structural failings that arise from greed, corruption, or just plain lack of common sense and civil discipline.

Popular culture has a symbol for instances where a great deal of uncoordinated and unproductive activity takes place without appreciable positive results: The Keystone Kops.

The name has since been used to criticize any group for its mistakes, particularly if the mistakes happened after a great deal of energy and activity, or for a lack of coordination among the members. For example, in criticizing the Department of Homeland Security’s response to Hurricane Katrina, Senator Joseph Lieberman claimed that emergency workers under DHS chief Michael Chertoff “ran around like Keystone Kops, uncertain about what they were supposed to do or uncertain how to do it.”  Wikipedia

Reports have surfaced comparing the “best” responses to COVID-19 (relatively rapid effective containment) against the “worst” (undisciplined efforts that fail at rapid containment).

Wired published an article illustrating “best” responses. Countries that are exhibiting effective responses are Singapore, Hong Kong, Taiwan, South Korea and Japan. They learned from SARS and H1N1, and used that knowledge to build and maintain permanent public health infrastructures that can be activated in emergencies.

Singapore, Hong Kong, Taiwan, and South Korea all share the characteristic of using their experiences with prior outbreaks to build a system—and then sustaining it. None of them had to deal with the fear of being a first-mover, of being the first city or country to institute seemingly severe countermeasures. Their countermeasures were already in place, waiting to be reactivated.

In other words, these countries were able to leap into action with effective weapons against COVID-19. Again from the Wired article:

Here’s how those Asian countries are doing it: According to a new article in The Lancet, Hong Kong, Japan, and Singapore all developed their own tests for Covid-19 as soon as the genetic sequences for the virus were published, and ramped up production of the materials necessary for those tests. (That’s a sharp contrast with the US, which still doesn’t have enough tests for nationwide use, and may actually be running out of the materials necessary to make them.) Each country instituted controls over immigration (a controversial move that the WHO recommended against, but that they did anyway). They rejiggered their national financial systems to make sure people didn’t have to pay for tests or treatment. (Easier in places where most health care is already nationalized, to be sure—and in some more progressive American states like California, Washington, and New York. In fact, New York Governor Andrew Cuomo even ordered paid sick leave for quarantined people and free hand sanitizer.)

The article in Wired gives a good picture of effective responses to pandemics (by the way, “pandemics” do not denote severity of an infectious disease, but the disease’s ability to spread globally). However, the last sentence in the paragraph above merits examination.

The “more progressive American states like California, Washington, and New York” excel in Keystone Kops type of activity, in addition to lacking any semblance of effective public health infrastructures.
California, for example, spends countless millions on its ever growing homeless-drug industry. Streets in major cities like Los Angles and San Francisco are home to thousands of drug addicts and mentally disturbed individuals. Diseases like typhus and leprosy have been detected among this vast unsheltered population. Response? Governor Gavin Newsom declared on Sunday March 15 that private hotel and motel rooms will be used as necessary to house homeless individuals at risk of contracting COVID-19.

Additionally, the Governor wants all individuals 65 and older not to leave their home. Good luck, seniors, obtaining your food, water and medicines. Not that the rest of the California population is doing all that well obtaining supplies given that many grocery shelves are empty.

The homeless are not the only “invisible” inhabitants in the U.S. Undocumented immigrants welcomed in sanctuary cities and states might not be too anxious to be identified. They, along with other working poor, might not have the luxury or “working from home” like their “professional” brethren.

Indeed, as the article in Wired says “Don’t tread on me” Americans are not as willing as residents of Singapore or South Korea to abide by a highly disciplined lifestyle when necessary. So our Keystone Kops leadership have no means of containing pandemics other than invading private property to house those at risk, closing schools but ordering libraries and recreational facilities to take in children of parents who need to keep on working to survive (let that sink in), and urging people to stay home.