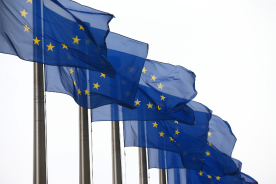 The press is all atwitter over the U.S. State Department’s decision made late in 2017 (nobody knows when) to return the European Union to its pre-President Obama status of international organization – a downgrading from “state” (i.e., country). Nobody seems to know whether this downgrade is an error, deliberate, temporary, permanent, etc.
The press is emphasizing that the U.S. did not advise the E.U. powers that be that this downgrade had taken place. Maybe the emphasis should be on what constitutes a state, that is, a sovereign country. Maybe this is a good time to think about what is a legitimate jurisdiction and what is not.

In the view of the Just Vote No Blog, the E.U. is a bureaucracy, not a country, and therefore should be treated as a bureaucracy. Putting lipstick on this little ducky is not going to help make it a swan.

A country has a governing body that reflects choices – beneficial or not — of its residents. The residents’ choices might result in a republic such as the United States, a socialist democracy such as Venezuela, or a theocracy such as Iran. Conversely, a bureaucracy has a governing body that reflects the choices of those who appoint the bureaucracy’s leaders; a bureaucracy does not stand directly accountable to anyone.

The current U.S. Administration could ignore the question whether the E.U. is a country, and that would certainly be a good way to maintain amicable relations and not upset any apple carts. However, the results of ignoring the question of what constitutes a real jurisdiction would bring collateral damage, such as a proliferation of unaccountable bureaucracies at the international, national, and local levels (if you are not familiar with your regions’ Metropolitan Planning Organization, google it, and see how much power over your local land use it has).

One must not underestimate the tenacity of bureaucrats.