Media users that do not follow today’s prescribed line of thinking are feeling the pain. Outliers big and small are squawking loudly and persistently about curtailed “reach” of posts, invisible tweets, and shadow banning. Seems that The Powers that Be have devised a most effective way to help silence any differing views.

The Decline of America

Such media efforts are only the latest developments aiding in the nation’s covert decline – a decline evidenced by a gargantuan and growing national debt, decimation of our manufacturing base, rise of the 1% accompanied by decline of the middle class and explosive growth of the dependent class.

The reason is that the media tantrum is 1) the result of powerful monopolies, and 2) monopolies demand obedience.

Obedience creates an echo chamber into which we plebeians must fit. Inhabitants of echo chambers do not think; they regurgitate. They do not create; they copy. They do not question; they accept. They are good at following orders.

Rise of the Monopolists

Conversely, monopolists do not follow, but lead. Take for example, Peter Thiel, co-founder of PayPal and early investor in Facebook. There is no question that Mr. Thiel’s innovations in several industrial and financial sectors have greatly benefited people. Most of us have made good use of PayPal or aspire to own an electric car, and businesses benefit from the data integration provided by Palantir. However, in spite of his obvious intellect, Mr. Thiel’s view of monopolies seems self serving. Here is an excerpt from an article discussing Peter Thiel’s book Three Cheers for Creative Monopolies.

PayPal co-founder Peter Thiel advocates the benefits of creative monopoly. That’s a company that is “so good at what it does that no other firm can offer a close substitute.” They give customers more choices “by adding entirely new categories of abundance to the world.

He goes on to say, “All happy companies are different: Each one earns a monopoly by solving a unique problem. All failed companies are the same: They failed to escape competition.” He suggests entrepreneurs focus on “What valuable company is nobody building?”  The Balance, May 2018

A monopoly is a monopoly, creative or not, since causes and effects are the same no matter what one calls a monopoly. Today, the cause is barrels full of cash generated by cheap borrowing that enable vertical and horizontal acquisitions. The effect is concentration of products and services in a few gigantic companies, regulated or unregulated.

Sure the giants in their field offer consumers “choices,” as Peter Thiel says. But to what extent? You don’t like the way Facebook is treating you? Go to the competition! Oh wait, there isn’t any.

There Once Was the Model T 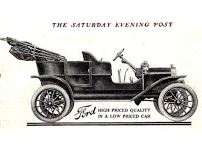 One might say that when Henry Ford perfected the assembly lines that produced the Model T, a car that dominated the market for its relative affordability and simplicity, his company earned the distinction of being so good that no other firm offered a close substitute. With the mass-produced Model T, the company also added an entirely new category of abundance to the world.

Any customer can have a car painted any color that he wants so long as it is black.

So, General Motors, who up until then catered to the moneyed class, started to make affordable cars that were not black, and had bells and whistles that the utilitarian Model T eschewed.

Good lesson on how to thwart a company’s dominance in a market!

Private companies, including those that provide media services, should be free to run their businesses as they see fit. It’s their house.

It is up to consumers to do their due diligence so they understand what they are purchasing and how they are paying in one form or another for the products and services they buy. The cost might be a tacit agreement to tow the prescribed line of thinking. Or the cost might be sharing all your needs, wants, preferences, and ideals so you can be efficiently placed in the appropriate marketing and cultural category.

It is also up to consumers, as well as voters, to make choices. Some consumers now suffering from the whims of media might be tempted to clamor for government regulation, thereby exchanging one master for another.

Miracles do happen, and perhaps once enough consumers of media, especially social media, complain about their dissenting opinions being scrubbed from view, media companies will see the error of their ways and be inclusive (a favorite term of progressives). But if that miracle does not happen….

Must you settle for being dependent on media, especially social media? How about creating your own mailing lists, reaching out to like-minded people and groups, supporting the endeavors of like-minded people in exchange for their support?

Might participating in the rise of creative alternative means of communication be a better choice than continuing to send out invisible tweets and posts?