The review details significant gaffes by high-level FBI employees, two of whom demonstrated astonishingly unprofessional political bias, lists a number of actions that could have been handled differently (for example, no effective follow up on the discovery of official emails on the laptop of Anthony Weiner), and notes improper sharing of non-public information with the press.

In his response to the OIG report, FBI Director Christopher Wray admitted his agency had corrective work to do, but emphasized the misdeeds were the work of a “small number” of employees,

The OIG report makes clear that we’ve got some work to do. But let’s also be clear on the scope of this report. It’s focused on a specific set of events back in 2016, and a small number of FBI employees connected with those events. Nothing in the report impugns the integrity of our workforce as a whole, or the FBI as an institution.

Indeed, the OIG’s report is narrow in scope, and its findings of misconduct involve only five out of 35,000 FBI employees. However, the report does state in its conclusion,

The damage caused by these employees’ actions extends far beyond the scope of the Midyear investigation and goes to the heart of the FBI’s reputation for neutral factfinding and political independence.

In other words, a concerned layperson should ask: Nobody noticed this stuff was going on, or were the questionable activities either tacitly or openly accepted?

We would suggest two additional questions: What in the OIG’s report was “new?” The press had already reported politically charged exchanges between the two principal transgressors mentioned in the report. We know the FBI is staffed by people just like the rest of us, flawed. Remember, the agency did not bat an eyelash before wire-tapping Martin Luther King Jr., for example.

Or the Deep State? 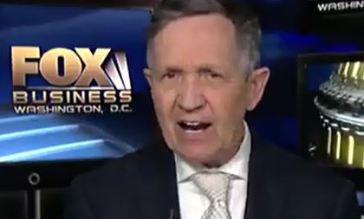 Way back in February 2017, former Democrat Congressman from Ohio Dennis Kucinich stated on a segment of Fox News that U.S. intelligence agencies have their own agenda. Kucinich was referring to what he perceived as an effort to bring on a new Cold War, costing taxpayers billions but richly lining the pockets of armaments purveyors.

Dennis Kucinich repeated his perceptions on May 18, 2017, on the Fox Business Network. In this segment of the news, Mr. Kucinich spoke of actions by the U.S. intelligence agencies designed to undermine the U.S. presidency, thereby undermining the entire democratic process of elected officials carrying out the will of their constituents. The bureaucrats staffing agencies are not elected and not accountable either, indicated Mr. Kucinich.