Today’s U.S. federal debt is around $21 trillion, $64,724 for every man, woman, and child in the country., and growing every second. So, who cares, you say, as long as domestic production is so wonderful. That is what the experts tell you. What they don’t tell you is that you are paying for that debt in one way or another, by way of taxes, foregone services, or risk. Also they don’t tell you that at some point the folks who have been lending the U.S. all that money will get spooked at the size of the debt and bail out.

How did we get to owe $21 trillion to individuals, foreign countries, and even our own Federal Reserve Bank? Because we elect our representatives based on the largess they promise to deliver. We make sure we get subsidized healthcare, education, housing, food, childcare. We want security.

Trends in Spending and Deficits

* The Congressional Budget Office says that in 2016, the federal government took in $3.3 trillion in revenues, and spent $3.9 trillion. The difference between revenues and expenditures is the federal deficit. 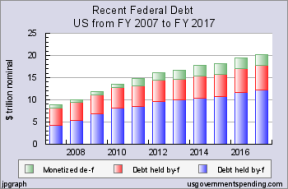 When job pays you less than you spend, you borrow from credit card companies, banks, credit unions, family, or friends. The federal government does the same thing – it borrows when it spends more than it earns. Here is a picture of the federal steadily-growing debt 2007 – 2017, showing debt in December 2017 at $21 trillion.

If the U.S. finds it owes so much money, and has to pay so much interest that there is little money left for any federal operations at all, then the country will have to either stop spending, raise taxes to astronomical levels, or default. If default had happened in 2017, guess who would be left holding the biggest bag? Look at foreign vs. domestic debt:

How about the “Debt doesn’t matter” Argument?

Experts like Paul Krugman and Robert Reich used to tell us that debt does not matter since GDP made the country grow, debt or no debt. However, they seem to be clarifying their stance these days.

“Today’s debt is about 77 percent of our total national product. The reason it’s a problem is it’s growing faster than the economy is growing, so it’s on the way to becoming larger and larger in proportion.” Robert Reich

“What changes once we’re close to full employment? Basically, government borrowing once again competes with the private sector for a limited amount of money. This means that deficit spending no longer provides much if any economic boost, because it drives up interest rates and “crowds out” private investment.” Paul Krugman

It is difficult to tell whether these two gentlemen, champions of progressive politics, suddenly saw the light or they saw a Republican administration in Washington DC.

GDP is not supporting the debt, so what to do?

We could print more dollars to keep up with the debt and hope our creditors don’t mind their increasingly worthless investment.  We could hope we will be dead by the time the Ponzi scheme collapses.  Alternatively, we could bite the bullet and start fixing the mess by cutting spending and not giving tax cuts to billionaires.

We could start the spending cuts by bring our defense spending in line with everybody else in the world.