Although the Just Vote No Blog is non-partisan, it is definitely political, and definitely liberty-leaning!

Thus the reason for this post on John Dennis, a Republican who is running for City Supervisor in a town without one single Republican elected official. The only Republican to hold elected office in San Francisco in the recent past was James Fang, who was unseated from his Bay Area Rapid Transit Board seat by Nick Josefowitz, a Democrat whose campaign made a point of suggesting that a Republican had no place in San Francisco.  Now Josefowitz is also running for Supervisor in the same district as John Dennis.

A peculiarity of this Supervisorial campaign is that John Dennis is a peculiar Republican. One would not discern that from his current campaign website, since the office of San Francisco City Supervisor (what other towns might call council member) is non-partisan and nowadays pretty much focused of homelessness, the housing shortage, and dirty streets.

However, Dennis conducted three most lively campaigns, against totally entrenched Democrat Representative of Congressional District 12, Nancy Pelosi (2010, 2012, 2014). In those campaigns Dennis made news as an uncharacteristic Republican. As sample, here are excerpt from a 2014 Los Angeles Times article.

He differs with social conservatives on same-sex marriage, believing such wedlock is none of the federal government’s business, and also on legalized abortion, saying he is “not comfortable using the force of the state” to outlaw the procedure. He breaks with the chest-thumpers in the GOP who offer American exceptionalism as a rationale for an expansive and assertive foreign policy.

The L.A. Times article mentions U.S. Congressman, now retired, Ron Paul, the uncompromising supporter of individual liberty (readers can safely ignore the article’s reference to Paul’s “neo-isolationism,” since there is a difference between isolationism and imperialism). Paul ran for President three times, 1988, 2008, and 2012.

Paul, of course, came nowhere close to winning the GOP presidential nomination, due in no small part to his provocative neo-isolationism. He did, though, build a national following of like-minded Ayn Rand acolytes who shared his fiercely anti-Washington, small-government, keep-your-mitts-off-me-and-my-property philosophy. Dennis, 51, was one of them.

Could this Republican Win?

Does this Republican have a chance to win the Supervisor’s race in San Francisco’s District 2, when the town is solid Democrat?  He could!  The San Francisco Examiner carried a recent article stating that a random survey “placed Dennis second behind the incumbent, Supervisor Catherine Stefani.”  One might add the survey placed Dennis ahead of Nick Josephowitz, the aforementioned BART Board director, and Schuyler Hudak, a media startup founder also in the race.

Finally, speaking of Ron Paul, here is an old picture of Ron Paul and John Dennis that a lot of liberty-leaning folks still like to post. 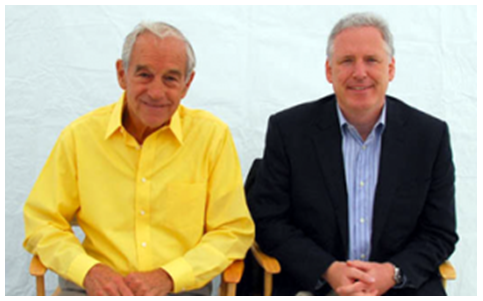